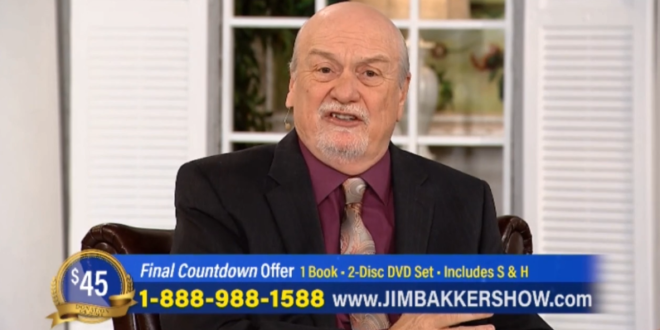 Jim Bakker Guest: An Asteroid Will Strike Us In 2029, Unleashing An Alien Virus That Will Bring The Antichrist

“I believe Apophis is the asteroid that is talked about in the book of Revelation, chapter eight. It is what is called ‘Wormwood’ in the bible. I believe that Apophis is carrying an alien microorganism on it in which a virus is being sustained. I believe it’s going to make coronavirus look like a walk in the park. On impact with the Earth, the contagion that is going to be brought to this planet. I think that it’s going to be a trigger event that ultimately leads to the mark of the beast, which will mean that you’re going to have to be vaccinated.

“A contagion during the Tribulation period could sweep the world. Literally tens of millions of people are dying by the hour, and an international cry goes up around the world for some kind of cure, a vaccine. Well, a man comes forward—a single individual who happens to be the Antichrist—and he’s the only man on Earth whose blood is naturally immune to this alien virus. And so a vaccine is created from his blood by which all mankind then are required to be inoculated. So, it’s almost like a black communion.” – Totally not crazy Tom Horn.

MIT researchers are preparing for a rare peek into the large asteroid Apophis that will narrowly miss Earth in 2029, but its flyby could provide the first insights into how Earth’s gravity might affect its surface when it approaches.https://t.co/hNrczqrV83 pic.twitter.com/YF46emS3y0

Previous Falwell Posts Vax Selfie, Says Get Yours So My “Nutcase Gov Will Have Less Reasons For Mindless Restrictions”
Next Beauty Queen Arrested Over Crown-Snatching [VIDEO]