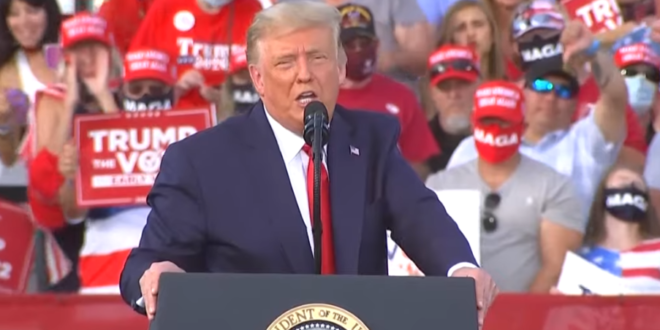 Facing a cash crunch and getting badly outspent by the Democrats, the campaign had begun last September to set up recurring donations by default for online donors, for every week until the election. Contributors had to wade through a fine-print disclaimer and manually uncheck a box to opt out.

As the election neared, the Trump team made that disclaimer increasingly opaque, an investigation by The New York Times showed.

It introduced a second prechecked box, known internally as a “money bomb,” that doubled a person’s contribution. Eventually its solicitations featured lines of text in bold and capital letters that overwhelmed the opt-out language.

Former President Trump’s 2020 reelection campaign reportedly issued a total of roughly $122 million in refunds to supporters in 2020. The refunds were given, in part, because of a fine-print disclaimer in communications that officials used to continue charging one-time donors or doubling their contribution amounts.

Trump continued to raise money after Election Day through what he claimed was an effort to fight widespread voter fraud in several states. The Trump campaign allegedly used tens of millions of dollars from his “Stop the Steal” efforts to help cover the refunds owed to donors.

The Times piece opens with the story of one Trump donor whose rent checked bounced because of multiple withdrawals by the Trump campaign. That man has since died of cancer. As those who follow me on Twitter might remember, I pointed out this “1000% impact!” scam many, many times.

“Bandits!” said Victor Amelino, a 78-year-old Californian, who made a $990 online donation to Mr. Trump in early September via WinRed. It recurred seven more times — adding up to almost $8,000. “I’m retired. I can’t afford to pay all that damn money.” https://t.co/IuTnRRdkXw

Total Trump grift. Shows you how Donald Trump and his crooked crew played his supporters for chumps. They were always just marks. https://t.co/4vWC5CM11i

#MAGA THEFT: Stacy Blatt, a 63-year-old battling cancer and living on less than $1,000 per month gave everything he could to Trump: $500.

“Another $500 was withdrawn the next day, then $500 the next week and every week through mid-October.” #DonTheCon https://t.co/P7zyOnhISX