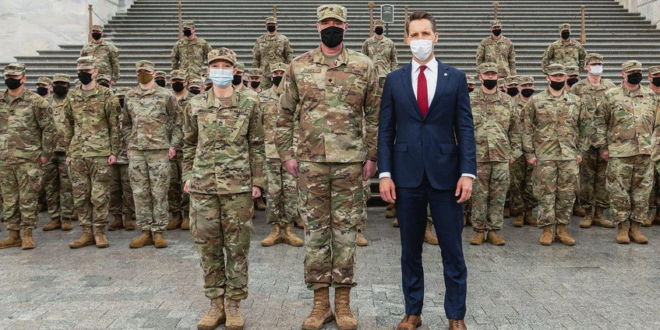 Hawley Roasted For Photo With Troops At US Capitol

Sen. Josh Hawley (R-MO) received significant backlash this week after he praised the Missouri National Guard for their work in supporting Capitol police. Hawley, of course, was one of the leading Republican senators to challenge the results of the 2020 election, which incited supporters of former President Donald Trump to violently storm the Capitol building on January 6th.

This is like Jefferson Davis standing with the Union Army. Wtf… https://t.co/AWLzL41IOQ

Hey Josh quick q, why are they there https://t.co/huaMuo5S9q

This would be like Bin Laden doing a photo op with the first responders of 9/11 https://t.co/5BaCFhT38u

Nice try, but we aren’t going to forget. pic.twitter.com/hNlEKJEIOK

Wow, that’s brazen. You cheered on the group that put dozens of CP in the hospital (killing one), but then you take a picture with these troops.

If none of them spit on you, it’s because they have more honor, integrity, and patriotism than you’ll ever understand.#ResignHawley

Previous McConnell Blocked Ginsburg Memorial In Rotunda
Next Official: Tokyo Olympics May Be Canceled Over COVID