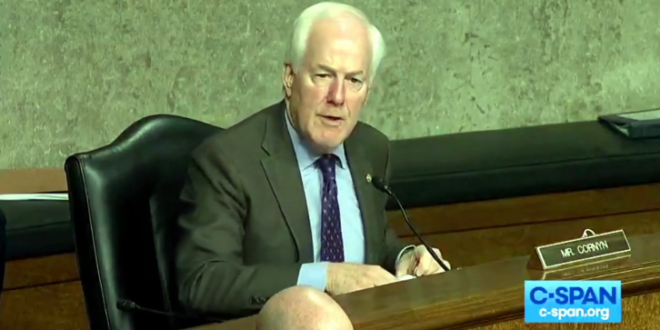 Texas Republican Senator John Cornyn performed a spectacular “Gotcha!” fail when he tried to trip up Kristen Clarke at her conformation hearing to be President Joe Biden’s assistant attorney general for civil rights. “Well, maybe there’s a misprint, but I’m sure you can clear it up for me, dating back to your days in school when you seemed to argue that African-Americans were genetically Superior to Caucasians,” Cornyn Matlocked, then asked “Is that correct?”

That’s all the set-up you need. Now watch the clip, which has gone wildly viral this afternoon.

John Cornyn grills assistant attorney general nominee Kristen Clarke about an article she wrote for her college paper, seemingly oblivious to the fact it was satire pic.twitter.com/qMG3LNg2AO

My god… Watching Kristen Clarke (Biden’s Asst. AG nominee) utterly DESTROY Senator John Cornyn’s attempt at a ‘gotcha question’ as he brings up what she wrote at Harvard at age 19, only for her to point out that it was actually anti-racist satire… Amazing 🙌#ConfirmClarke

Previous CO Man Charged With Death Threats Over Face Masks
Next South Dakota Governor Refuses To Accept Migrants: You Can Tell Them To Call Me When They’re Real Americans