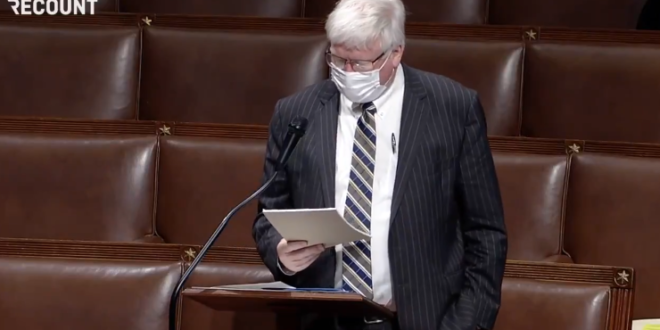 “I received complaints in my office, and rightfully so, about Cardi B and the Grammys. They wonder why we should be paying the FCC if they feel this should be in living rooms across the country. Wake up FCC and begin to do your job!

“The moral decline of America is partly due to your utter complacency.” – Rep. Glenn Grothman, reading a complaint into the House record in a classically Republican bit of performative outrage for the hometown crowd.

Roll Call examined complaints to the FCC about Cardi B’s Grammys performance and found only one from Grothman’s district. The Grammys, it’s worth noting, took place six weeks ago. Nevertheless, Cardi B noticed his rant and responded in her usual fashion.

RELATED: Grothman, who last appeared on JMG when he coughed uncontrollably during a no-mask GOP event, has all the usual anti-LGBT positions and has railed against so much as mentioning the existence of LGBT people in public classrooms. He’s said that Kwanzaa is a “fake holiday” and that Black Lives Matter activists don’t care about the “old fashioned family,” whatever that is.

This gets me so mad ya don’t even know! I think we all been on the edge this week since we seen police brutality back to back including watching one of the biggest case in history go down DUE to police brutality but wait ! This is wat state representative decide to talk about 🤔 https://t.co/k2ZBn9gONA

This congressman picked a fight with Cardi B. It went how you’d expect ⁦@saksappeal⁩ reports https://t.co/K3Isu9CHhK