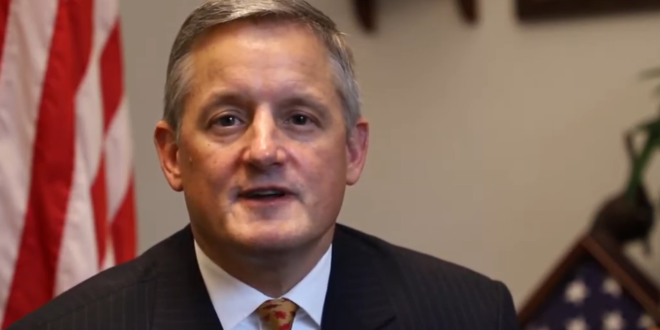 After the House chamber was evacuated on Jan. 6, Mr. McCarthy retreated to his Capitol office with a colleague, Representative Bruce Westerman, Republican of Arkansas.

When it became evident the rioters were breaking in, Mr. McCarthy’s security detail insisted he leave. But Mr. Westerman was left behind in Mr. McCarthy’s inner work area, he said in a recent interview.

For protection, Mr. Westerman said he commandeered a Civil War sword from an office display, barricaded himself in Mr. McCarthy’s private bathroom and waited out the siege while crouched on the toilet.

Read the full article. Westerman was among the 126 GOP House reps who signed an amicus brief in the Supreme Court suit seeking to overturn the result of the 2020 presidential election.

During the riot, Westerman tweeted, “Americans will always disagree on politics, but violently storming our nation’s Capitol is absolutely unacceptable. People are getting hurt. Enough.”

It is unknown if Westerman was in McCarthy’s bathroom at that point. His spokesperson said he was unavailable on Tuesday to comment on The New York Times’ report.

Arkansas leaders from both parties largely condemned the Jan. 6 Capitol attack. U.S. Rep. Steve Womack, also a Republican, said it was a “very dark day in Washington” from an office inside the U.S. Capitol shortly after the siege.

U.S. @RepWesterman of Arkansas hid on a toilet with a sword during the insurrection at the U.S. Capitol in January, according to a New York Times article. https://t.co/N0mH2WIjri pic.twitter.com/DZq3nNkPVV