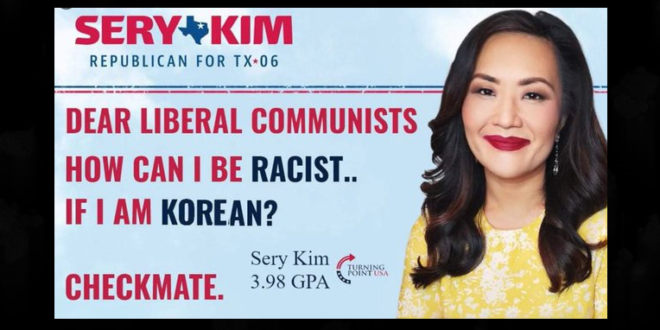 Comments by Sery Kim, a Korean American who served in the Small Business Administration under President Donald Trump, prompted California U.S. Reps. Young Kim and Michelle Steel to rescind their endorsements of her Friday. Young Kim and Steel are the first Korean American GOP women to serve in Congress. “We cannot in good conscience continue to support her candidacy,” the lawmakers said in a statement.

Sery Kim made the anti-Chinese remarks earlier this week at a GOP forum in Arlington while responding to a question about U.S. immigration issues. “I don’t want them here at all,” Sery Kim said of potential Chinese immigrants. “They steal our intellectual property, they give us coronavirus, they don’t hold themselves accountable. And quite frankly, I can say that because I’m Korean,” she added.

Read the full article. Kim is running in the special election to replace late GOP Rep. Ron Wright, who died of coronavirus in January. As you can see below, she’s backed by Charlie Kirk’s Turning Point USA.

WHY DID SHE PUT HER GPA LMAOOO pic.twitter.com/kFwthROdrE

Today I sued @TexasTribune @PatrickSvitek for defamation in a $10 million lawsuit.

This is how leftist media practices its brand of politically-correct discrimination against conservatives like myself.https://t.co/fzjOKkx3eY#TX06 #serykim pic.twitter.com/qwH2Qer7Dw