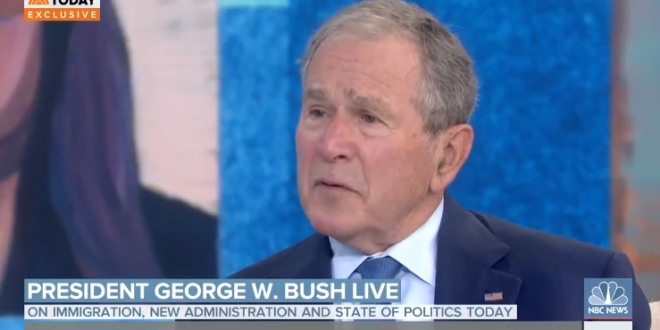 Former President George W. Bush said on Tuesday that today’s Republican Party is far from what it used to be. “I would describe it as isolationist, protectionist, and to a certain extent, nativist,” Bush said to host Hoda Kotb during an appearance on NBC’s “Today” show.

“Well that’s not exactly my vision, but you know what I’m just an old guy they put out pasture,” he added. “So just a simple painter.”

Bush is promoting his new book “Out of Many, One: Portraits of American Immigrants,” which is based on oil paintings by the former president on national figures and migrants.

How would you describe the Republican Party today? –@hodakotb

I would describe it as isolationist, protectionist, and to a certain extent, nativist. -Former President George W. Bush pic.twitter.com/tyFl2LnRMP