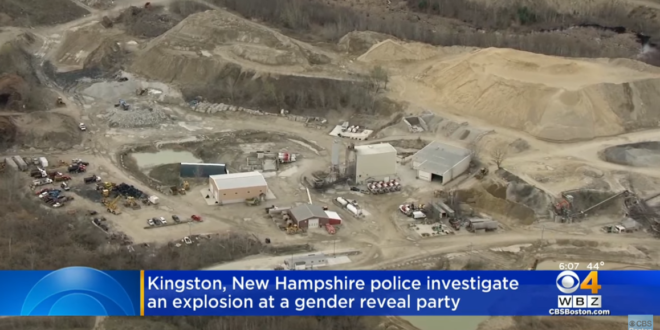 An explosion that rattled homes within a 20-mile radius Tuesday night is being blamed on a gender reveal celebration at a Kingston quarry that police say involved more than a pound of Tannerite and blue chalk. Many residents in communities across southern New Hampshire and northern Massachusetts reported hearing the explosion just after 7 p.m. Gender reveal party accidents — some deadly — have made headlines as they’ve grown in popularity among expectant parents over the past decade.

Read the full article. Some thought it was an earthquake.

UPDATE: Kingston police say approx. 80 pounds of Tannerite were used at that gender reveal party that caused a massive explosion that shook homes for miles. Man who detonated it has turned himself in to police and is cooperating. Police haven’t decided on charges. @UnionLeader