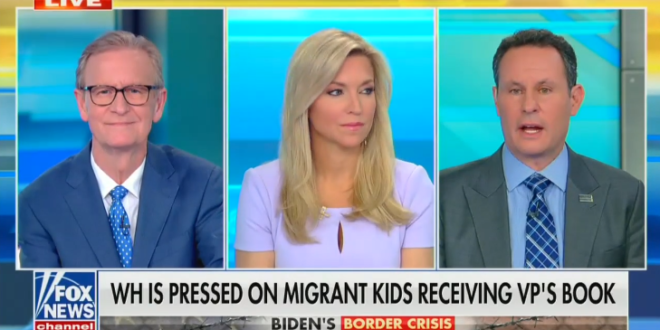 The hosts of Fox & Friends continued to push the false claim that Vice President Kamala Harris’ book is being given out to migrant children at the border, even after acknowledging that the Washington Post debunked the story.

“Is there a children’s version of Donald Trump’s books?” asked Brian Kilmeade. “Cause he has written quite a few of them. Imagine if they appeared at the border in a bag of goodies as you arrive here illegally?”

Steve Doocy, essentially ignoring the fact-check, then said, “It sounds like a third party, probably an NGO, is buying them, perhaps, unless they were donated and putting them in.”

Read the full article. Doocy went on to question why this mythical NGO isn’t donating “food and clothing” rather than Kamala Harris’s book.

In last 3 days, FOX has pushed lies, lies, lies that:

⁦@POTUS⁩ coming for your burgers, limiting Americans to 4 lbs a yr.@VP⁩’s kids’ book being given to migrant children at border.@Bakari_Sellers,⁩ a southerner, is faking a southern accent. https://t.co/o4eVb42dwG

Fox & Friends still pushing the lie about Harris’ book being given out to migrant children even as they sort-of-but-not-really acknowledge it’s been debunked. https://t.co/4iFGfrj9AL pic.twitter.com/ky4UvB18ir