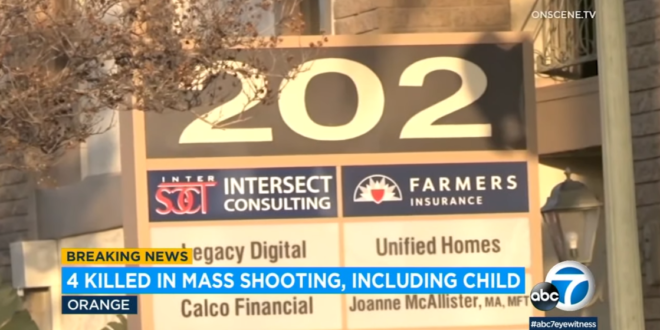 Four people, including a child, were killed Wednesday evening and a fifth person was injured in a mass shooting at an Orange office complex.

It marks the third mass shooting in the United States in two weeks, coming after incidents at three Atlanta spas that killed eight people, including six Asian women, and at a Boulder, Colo., supermarket that killed 10.

The officers encountered gunfire when they arrived and opened fire. The shooter was taken to a hospital with a gunshot wound and was listed in critical condition Wednesday night. It was unclear if the wound was self-inflicted or if he was struck by police gunfire.

No known motive at this writing.

Horrifying and heartbreaking. Our hearts are with the families impacted by this terrible tragedy tonight. https://t.co/nw3On2RJH2