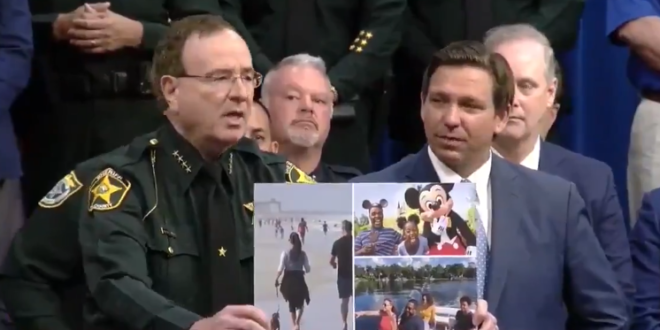 FL Sheriff Celebrates New “Anti-Riot” Law, Warns New Residents Not To “Vote Stupid Like You Did Up North”

Polk County, Florida Sheriff Grady Judd appeared with Gov. Ron DeSantis (R) at the Monday signing ceremony for anti-riot legislation, and took the opportunity to warn new Florida residents against voting the “stupid way” they did in their old states. “We got a new law and we’re going to use it if you make us,” Judd said.

“We’re going to protect the people. We saw folks’ businesses around this nation who literally worked their entire life and had every penny in their life savings involved. We’re going to be proactive and we’re going to make sure people are safe.”

Judd gained publicity as a sheriff with his “tell it how it is” demeanor. In 2006, after a traffic stop resulted in a deputy and his K-9 dog being shot and killed, deputies shot and killed the suspect, shooting him 68 times. When asked by a reporter about the number of shots, Judd responded, “That’s all the bullets we had, or we would have shot him more.”

“Welcome to Florida. But don’t register to vote and vote the stupid way you did up north; you’ll get what they got.” pic.twitter.com/602idmHEYQ