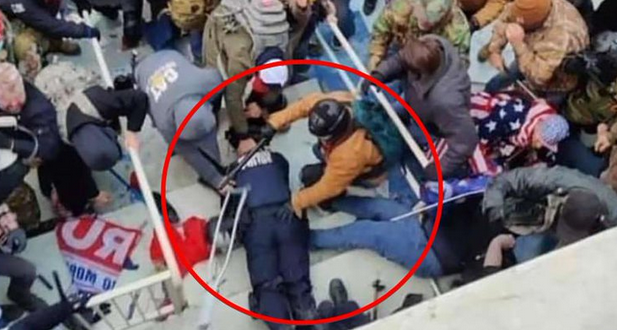 When Jeffrey Sabol returned to his Colorado home after allegedly storming the U.S. Capitol and assaulting two police officers on Jan. 6, he fried his electronic devices in the microwave, destroyed any materials he thought could be “misconstrued as anti-government,” and stashed his guns at a friend’s house, prosecutors said.

Then he traveled to Boston with plans to hop a flight to Switzerland in a plot to avoid extradition, according to court documents.

He never ended up flying to Europe. But thanks to that plan, the 51-year-old geophysicist will now stay in custody until he goes to trial on the eight misdemeanor and felony offenses he faces over his alleged role in the insurrection.

Accused Capitol insurrectionist Jeffrey Sabol, who tried to flee to Switzerland, will now be held until trial. https://t.co/RoHTmvhMnG

In court hearing, an attorney for Jeffrey Sabol says he has “come to terms with the mistakes that he’s made.”

Sabol, he said said, realizes his “mindset on January 6 was completely wrong” and he’d “been lied to.” pic.twitter.com/fICb7bKGT3

Case unsealed in D.C. against Jeffrey Sabol (who has been ordered held without bail).

“SABOL acknowledged that the video seemed to depict him throwing punches at the police officer, but claims he was ‘patting him on the back’ and saying ‘we got you man.’” pic.twitter.com/ojFnwuaCQo

Jeffrey Sabol allegedly beat cops during the Capitol siege. After 1/6, he traveled from CO to Boston & booked a flight to Switzerland. He freaked out at the airport, rented a car, drove south, and tried to kill himself. He survived, was arrested and jailed https://t.co/oPhc1k1tZ6