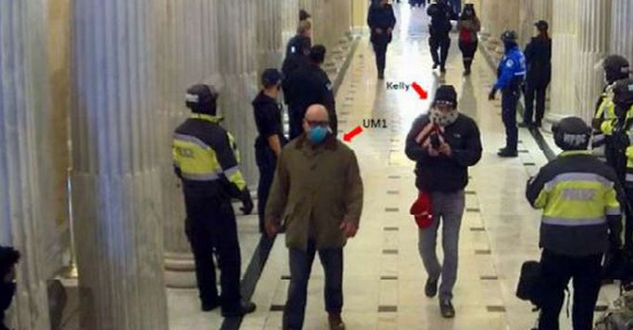 Feds: QAnon Man Thought He Was Storming The WH

A family member turned in an Ocala man who went to Washington D.C. “knowing full well they were going to break in” to the U.S. Capitol on Jan. 6, according to the U.S. Justice Department. Kenneth Kelly, 58, also sent text messages saying he entered the Capitol by breaking windows, an affidavit said. He turned himself in Friday at the Florida U.S. Attorney’s Office in Ocala.

Pictures from surveillance video and text messages provided to the FBI show Kelly inside the Capitol, which he kept referring to as the White House, the affidavit said.  “Inside the White house via breaking in windows,” a text message said. “Tree of liberty was watered today.” The family member told FBI agents Kelly had “extreme political views” and mentioned the conspiracy site “QAnon” a couple months before the riot.

.@fbi investigators say Kenneth Kelly may have been a #QAnon supporter. Pictures show him in a blue beanie inside the Capitol on Jan 6. @news6wkmg #CapitolRiots pic.twitter.com/rxyWOkYgQy