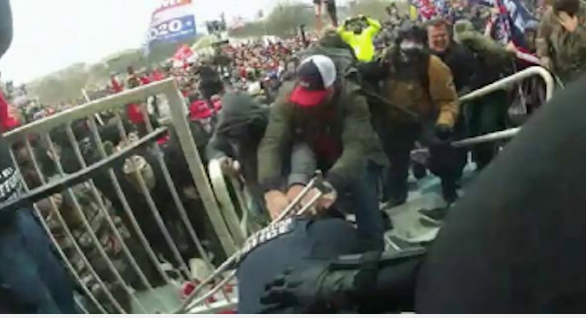 Federal prosecutors in Washington, D.C. on Monday asked a federal judge to reconsider allowing a man accused of assaulting several police officers with a weapon during the Jan. 6 riot at the U.S. Capitol to be released from jail ahead of trial.

Prosecutors argue that Jack Wade Whitton poses a serious threat to the safety of the community.

According to the government’s motion, Whitton, a 30-year-old fencing contractor and CrossFit instructor from Georgia, was responsible for some of the most brutal violence that took place during the pro-Donald Trump insurrection.

Read the full article. Watch the clip below.

CrossFit Instructor Who Beat Officer with a Crutch Is ‘Danger to the Community’ and Should Stay Jailed Ahead of Trial, Prosecutors Arguehttps://t.co/TkB2BfqS2y

#SeditionHunters work cited in prosecution memo seeking revocation of a release order for Jack Wade Whitton, who was charged with beating officers at the Capitol insurrection. #Scallops pic.twitter.com/i4SUEITWF0

My latest on the case against Jack Wade Whitton, the Trump fan who dragged a D.C. police officer down the Capitol steps by the neck. A federal magistrate judge in Georgia said he could be released, but the feds want him held until trial. #scallops https://t.co/fvlu3qFkpM

FBI #130-AFO aka #Scallops is wanted for assaulting officers with crutchespic.twitter.com/iL7Gr925tn