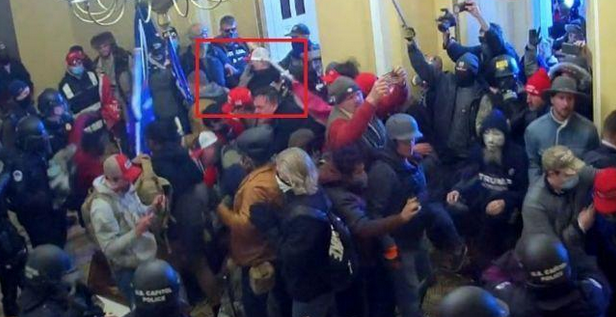 A criminal complaint filed on Friday in U.S. District Court for the District of Columbia charges Michael Fitzgerald, 42, with three counts: obstruction of law enforcement during civil disorder, entering and remaining in a restricted building without lawful authority, and violent entry and disorderly conduct on Capitol grounds.

According to a statement filed in court by FBI Special Agent Stephen Hart, Fitzgerald was part of a group that pushed its way into the Capitol against a group of police officers who were trying to keep rioters out of the building.

Photographs included with the FBI statement highlighted Fitzgerald and include a photo of a man said to be Fitzgerald wearing a shirt that reads, in part, “There will be a Wild Protest, Washington, D.C., Jan. 6, 2021, 12:00.”

Read the full article. As you may recall, Trump tweeted a call for his supporters to attend that day’s “wild” protest.

The FBI says Michael Fitzgerald was part of a group that pushed through police into the U.S. Capitol. https://t.co/QLqGnaBnvL

One of the guys pictured in this new FBI bulletin is wearing a shirt that says “THERE WILL BE WILD PROTEST! Washington, D.C., January 6, 2021 at 12:00PM”

Anyway, there was no way for law enforcement to know this was going to happen https://t.co/ym6wk2CN4m pic.twitter.com/9VtRGCiFme