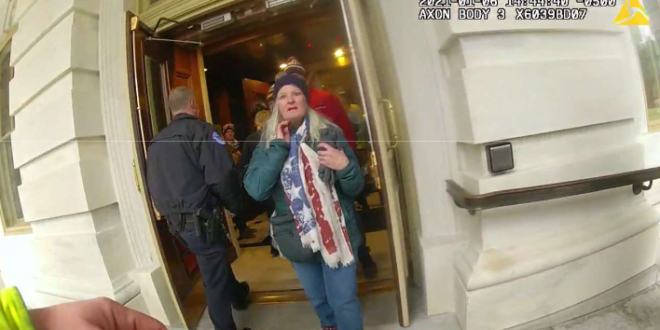 The FBI arrested a Kansas woman in connection with the Jan. 6 riot on the U.S. Capitol, court documents show. The FBI said Jennifer Ruth Parks turned herself in Friday, April 23. Charges against her include entering a restricted building without authority and disorderly conduct on Capitol grounds.

“PARKS entered the Capitol Building through the front lower door with no stairs. PARKS proceeded up a round staircase to the second floor and observed groups of people praying and singing. PARKS sung the U.S. national anthem in a group on the second floor of the building.”

“The tipster shared a text message screen shot between Parks’ daughter and an unknown individual where Parks’ daughter wrote: ‘So depressed over all of the cheating in the election right now. Mom and her friend went to Washington for the March. Wish I could have gone too. Lol.'”

The FBI arrested a Kansas woman in connection with the Jan. 6 riot on the U.S. Capitol, court documents show. https://t.co/oZktmo1L4U