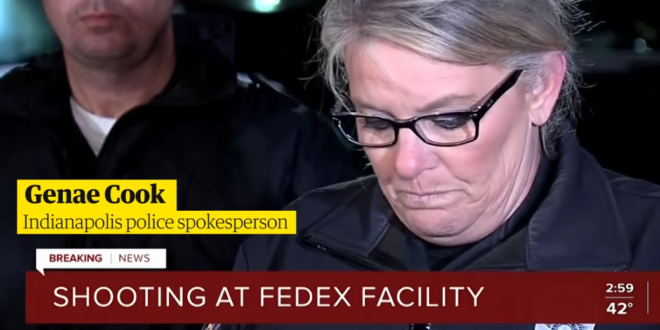 Eight people were killed and at least seven others were injured in a shooting at a FedEx warehouse in Indianapolis late Thursday, and the gunman was believed to have killed himself, the police said.

Officer Genae Cook of the Indianapolis Metropolitan Police Department told reporters Friday morning that at least five other people had been hospitalized with injuries, including one in critical condition.

Officer Cook told reporters that the police arrived at the scene just after 11 p.m., responding to a report that shots had been fired. They encountered an “active shooter incident,” she said.

A witness told NBC affiliate WTHR of Indianapolis that he was working inside the building when he heard gunshots. “I see a man come out with a rifle in his hand and he starts firing and he starts yellin’ stuff that I could not understand,” Levi Miller said. “What I ended up doing was ducking down to make sure he did not see me because I thought he would see me and he would shoot me.”

IMPD says 8 people have died and multiple others were injured in the mass shooting at the FedEx facility in Indy. pic.twitter.com/CwVCqEhmyn

The FedEx shooting “probably only lasted one to two minutes,” the deputy chief of criminal investigations for Indianapolis police said, adding that the suspect exited his vehicle and immediately began shooting while in the parking lot. https://t.co/NUuy3fUFaZ pic.twitter.com/18dd5mTxMD

I am heartbroken by the mass shooting at the FedEx facility here in Indianapolis and praying for all affected by this tragedy. I am communicating with local authorities to get all details of the attack and my office stands ready to help everyone affected any way we can.

IMPD Officer Genae Cook confirms an active shooter was at the FedEx building around 11:00, says they believe the gunman killed himself. pic.twitter.com/oUEYCpN1t5