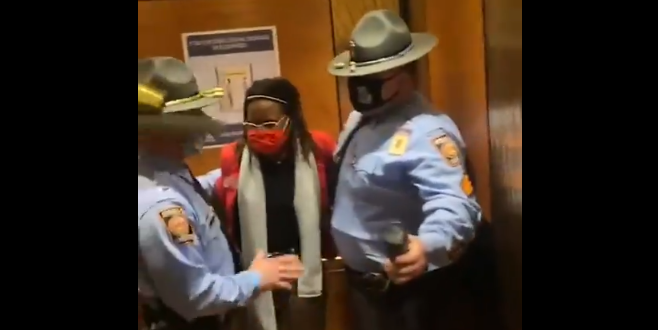 Fulton County’s district attorney said Wednesday that she won’t prosecute the Democratic lawmaker who was arrested last month after she knocked repeatedly on the door of Gov. Brian Kemp’s state office as he was on live television touting a sweeping new elections law.

District Attorney Fani Willis said she considers the case closed after reviewing the evidence surrounding the March 25 arrest of state Rep. Park Cannon, adding that she will not be presenting the case to a grand jury.

“While some of Rep. Cannon’s colleagues and the police officers involved may have found her behavior annoying, such sentiment does not justify a presentment to a grand jury of the allegations in the arrest warrants or any other felony charges,” Willis said.

Read the full article. Cannon, who identifies as queer, had been charged with two felonies.

Fulton County’s district attorney said she won’t prosecute the Democratic lawmaker who was arrested last month after she knocked on the door of Gov. Brian Kemp’s state office as he was touting a sweeping new elections law. #gapol https://t.co/u4eJVJvGw7

“Why are you arresting her?” This Facebook Live video from @TWareStevens shows the moment authorities detained state Rep. Park Cannon as @GovKemp was behind those doors signing elections restrictions into law. #gapol pic.twitter.com/U1xMJ6tZrY

I stand with Georgia State Rep. Park Cannon (@Cannonfor58), who was arrested and CHARGED WITH A FELONY for … for what?

For *knocking on Gov. Kemp’s office door* as she tried to observe the cowardly closed-door signing ceremony for the voter suppression law. pic.twitter.com/hpp6ZQxo2r

Previous TOMORROW: Biden To Take Executive Action On Guns
Next Cultist Ready To Go To Jail Over Massive Trump Flag