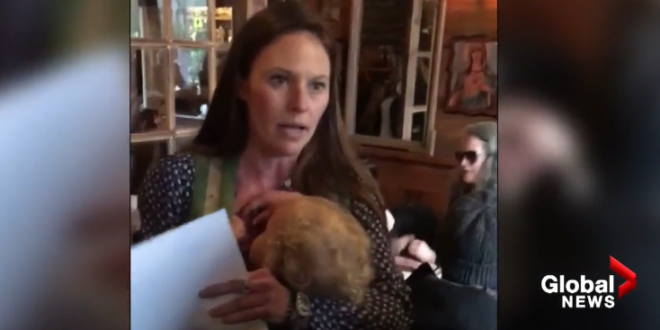 The owner of a Vancouver restaurant is vowing to continue defying a provincial health order banning indoor dining for three weeks, despite being served with an individual order to close.

On Monday it was announced this restaurant and another Vancouver restaurant have both had their business licenses suspended. Video posted to Facebook on Saturday showed what appeared to be staff with Vancouver Coastal Health attending to speak with Corduroy owner Rebecca Matthews.

In the video, Matthews, who is unmasked and has an infant strapped to her chest, tells the inspectors she does not recognize their jurisdiction and that they are trespassing. Diners at the packed restaurant then join into a chant of “Get out! Get out!” prompting the health officials to leave to cheers from the crowd.

Read the full article. The video is being gleefully shared on Twitter today by people like the Daily Caller reporter below.

This is what it’s going to take in many areas – mass civil disobedience. What a beautiful sight! pic.twitter.com/HxgRQeb3Yh