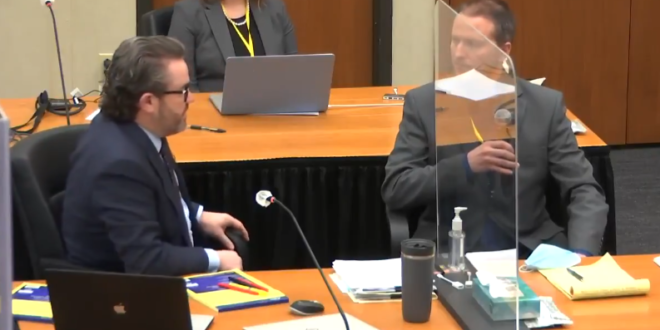 Derek Chauvin Invokes The Fifth, Will Not Testify

Derek Chauvin said in court Thursday that he will not testify in his murder trial. “I will invoke my Fifth Amendment privilege” to not risk making any self-incriminating statements in Hennepin County District Court, where he is charged with killing George Floyd.

District Judge Peter Cahill has said it’s his intention, once the defense rests, for the attorneys to make their closing arguments as soon as Monday before jurors are sequestered and deliberate whether the fired Minneapolis police officer should be convicted of using excessive force in the killing of George Floyd.

BREAKING: Former Minneapolis Police Officer Derek Chauvin says he will invoke his fifth amendment privilege and he will not testify on his own behalf. He adds that it was his own decision not to testify. pic.twitter.com/4FufHvGK6Z

BREAKING: #Chauvin to take the 5th.

Remember what #Trump said: “The mob takes the Fifth. If you’re innocent, why are you taking the Fifth Amendment?”#GeorgeFloyd

BREAKING: Derek Chauvin, ex-officer charged in the death of George Floyd, invokes the Fifth Amendment and does not testify at his murder trial. https://t.co/Enunb6nmRe pic.twitter.com/mSR9qcXLkv