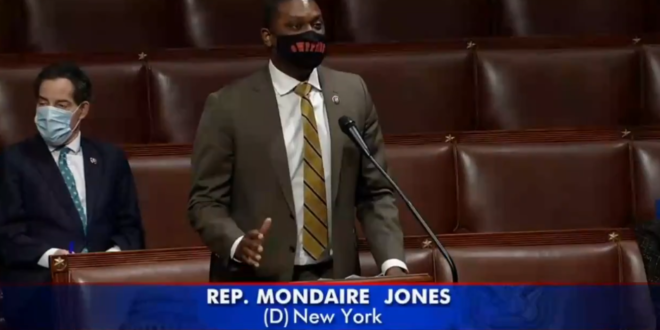 In a floor speech, Rep. Mondaire Jones, a progressive freshman and a vocal advocate for statehood, took aim at Rep. Jody Hice’s (R-Ga.) claim D.C. has no landfills., as well as Sen. Tom Cotton’s (R-Ark.) contrast between D.C. and a “well-rounded, working class state” like Wyoming.

“I had no idea there were so many syllables in the word ‘white,’” Jones said of Cotton’s argument, accusing Republicans of “racist insinuations that somehow the people of Washington, D.C. are incapable or even unworthy of our democracy” and of being “racist trash.”

A spokesperson for Rep. Mondaire Jones says he withdrew calling GOP arguments against DC statehood “racist trash” to “avoid an unnecessary vote” but “stands by what he said.” https://t.co/pXNlZABpeU

.@RepMondaire: “One of my House Republican colleagues said that DC shouldn’t be a state because the District doesn’t have a landfill. My goodness, with all the racist trash my colleagues have brought to this debate I can see why they’re worried about having a place to put it.” pic.twitter.com/EnbQLBfPgN

One of my Republican colleagues objected to #DCStatehood because DC doesn’t have its own landfill.

With all the racist trash they’ve been espousing in this debate, it’s no wonder they’re worried about where to put it. https://t.co/8cYQlx4Bq1

WATCH: Congressman @MondaireJones just spoke truth to power on the House floor about why some lawmakers oppose #DCStatehood.

Republicans forced him to withdraw his words, but the truth remains: Race is a critical factor in the long-term denial of rights for DC residents. Enough. pic.twitter.com/bTJX3VyBSp