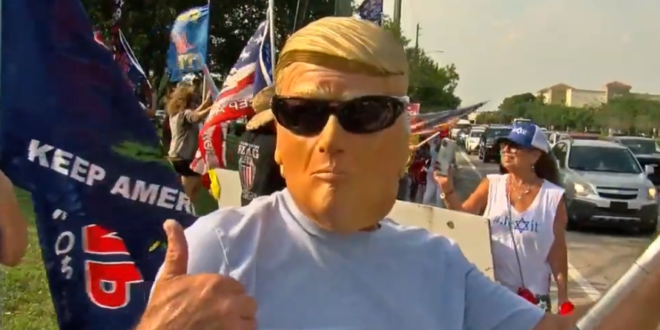 A conservative media outlet reported Gov. Ron DeSantis would “kick off” his reelection campaign Friday. But the event fell well short of that billing. DeSantis wasn’t even there. Right Side Broadcasting Network promoted “LIVE: FL Gov. Ron DeSantis Re-Election Campaign Kickoff in West Palm Beach – 4/16/21” for Friday afternoon. The timing was interesting, during the stretch run of the Legislative Session.

Toward the end of two hours of broadcasting, one of the hosts said that DeSantis would not be speaking after all. “There’s a little confusion. Gov. DeSantis is not going to be here speaking,” she said. Reporters milled about and interviewed rally attendees, including one gentleman in a “We Are Q” shirt. They continued to refer to it as an “official event” throughout the broadcast, teasing a Trump “drive-by” throughout.

Read the full article. Watch the clip. DeSantis was in Tallahassee and his office professed no knowledge of the event. Trump never appeared either.

Previous Pew Poll: Only 8% Say Weed Should Be Totally Illegal
Next Moderna To Have Third Booster Shot Available By Fall