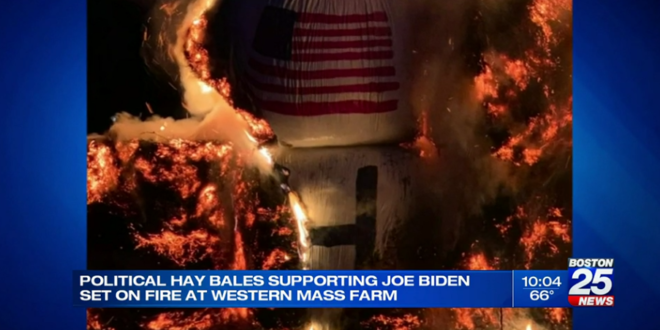 Cultist Sentenced To One Year For Biden Display Arson

Last month, a year in jail sounded like too much to Lonnie Durfee, the man who set fire last fall to a Dalton farm’s campaign endorsement, a crime covered around the world. On Thursday, he accepted it.

Judge Mark Pasquariello sentenced Durfee to one year in jail, the maximum penalty for the charge and the same sentence requested by District Attorney Andrea Harrington’s office.

A Dalton man has pleaded guilty to burning a local farmer’s hay bale display in support of the Biden-Harris ticket during the run-up to last fall’s divisive presidential election. https://t.co/ipPzhZ4to8

“Judge Mark Pasquariello sentenced Lonnie Durfee to one year in jail, the maximum

“Durfee expressed support for law enforcement, anger at news orgs that he said ‘keep lieing [sic]’ about Trump, and said Black people have more ‘rights than us.’ ”https://t.co/ppjBrQCoB1

Trump fan, Lonnie Durfee, 50, who set fire to hay bales with Biden-Harris 2020 campaign display, is sentenced to 1-year in jail

This is Lonnie Durfee. They’re going to love him in prison. pic.twitter.com/7BgtE2wFiT