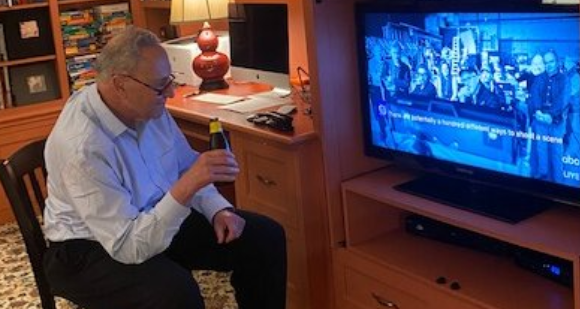 Senate Majority Leader Chuck Schumer (D-N.Y.) threw some shade at Donald Trump’s former economic adviser Larry Kudlow on Sunday. It was a reference to a gaffe on Fox Business last week. Kudlow, who joined the network as a host after leaving the White House, was railing against the Green New Deal proposal to combat climate change and falsely claimed it would force an end to America’s consumption of meat, eggs and dairy.

Read the full article. Kudlow claims that Biden will force Americans to celebrate the Fourth of July with “plant-based beer and grilled Brussell sprouts.” His stupid lie was echoed by many cultists, including both QAnon reps, Shitbag Todd Starnes, and Trump Junior. And as the above-linked article notes, all beer is “plant-based.”

Excited to be watching the Oscars with an ice cold plant-based beer.

This stuff is completely imaginary. Biden has not proposed any limit on Americans’ meat consumption.

What happened: 1) The Daily Mail ran an article that dishonestly connected Biden’s climate plan with a not-at-all-about-Biden study. 2) Others on the right just ran with this. pic.twitter.com/VRB52TPmUj

The UMichigan study is not about the Biden plan at all. It looks at what would happen to emissions if US people hypothetically cut their meat consumption by various %. Daily Mail took the biggest hypothetical % reduction studied and falsely made it sound like Biden demands this.

In children’s terms, the study found that if people reduce meat eating by a lot, emissions would fall a lot.

Daily Mail was like…Biden wants to cut emissions by a lot. Therefore, he’ll force people to reduce meat eating by the same amount this random study looked at.

Martin Heller, one of the authors of the not-about-Biden study all of this nonsense is misusing, told me today, “I, admittedly, have no idea what Biden’s plan has to say about our diets.”

Here’s a link to the study. https://t.co/YFiIL5stkp Fact check article to come!

Again, this is absolute nonsense based on nothing at all Biden did or said. But in certain circles, no explanation is needed even just 2.5 days after the lie was introduced into the right-wing ecosystem. (Or re-introduced, given that similar claims have been circulated before.) pic.twitter.com/hN21weKcCT

“No burgers for thee, but just for me.” pic.twitter.com/vXb4gCGsgW

Joe Biden’s climate plan includes cutting 90% of red meat from our diets by 2030. They want to limit us to about four pounds a year. Why doesn’t Joe stay out of my kitchen?