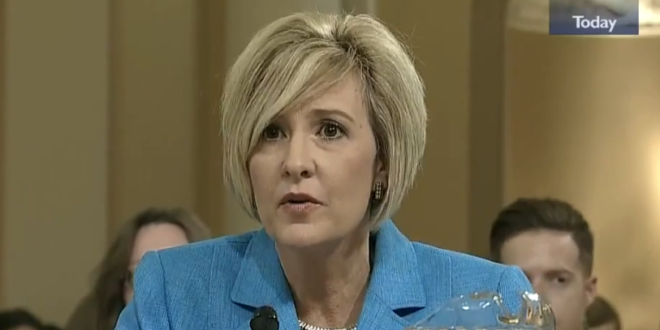 Alabama’s decades-old ban on yoga in public schools could stay in place a little longer following push-back from conservative groups.

The Alabama Senate Judiciary Committee on Wednesday did not advance the bill after a public hearing in which representatives from two conservative groups objected, saying they were worried it could lead to the promotion of Hinduism or guided meditation practices.

“Yoga is a very big part of the Hindu religion,” Becky Gerritson [photo], director of Eagle Forum of Alabama, told the committee.

Read the full article. Also testifying against the bill was John Eidsmoe, of Roy Moore’s Foundation for Moral Law, which advocates for replacing all levels of government with a system based on “biblical law.” Gerritson ran for the US House in 2016, losing the GOP primary by nearly 40 points.

In Alabama, a bill allowing yoga to be taught in public schools (albeit, this new allowance would require all poses to have English names) has stalled. Two conservative groups have objected to yoga’s ties to Hinduism: https://t.co/WBShP6QbyX