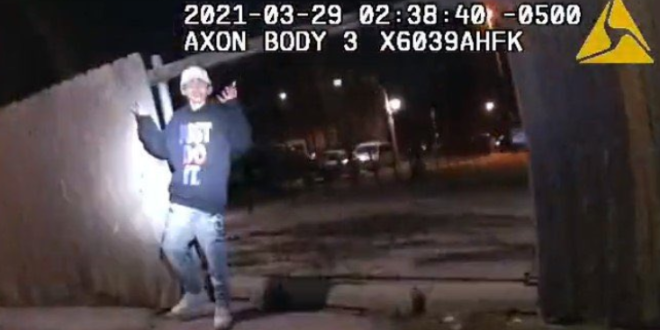 The mayor appealed for calm Thursday as the city released body-camera videos of last month’s fatal shooting of Adam Toledo, 13, by a Chicago police officer –an incident that appears to show his hands in the air as he was shot. According to one officer’s body-cam video, the officer pulls up in a car, gets out, pushes past another man and runs down an alley shouting “stop” toward Adam, who is dressed in jeans, a sweatshirt and white baseball cap.

As Adam slows down and pauses near a fence, the officer shouts, “Show me your f***ing hands.” He then shouts either “stop it” or “drop it.” Adam turns toward the officer and appears to put his hands up. He does not appear to have a gun in either hand but the video is unclear. That’s when the officer shoots – less than a second after Adam begins turning around to face the officer with his hands clearly raised.

A police watchdog agency Thursday released a video showing a Chicago police officer making a split-second decision to shoot Adam Toledo after seeing what appeared to be a gun in the hand of the 13-year-old boy — whose arms were raised when he was shot and killed.

Police have said they found a gun at the scene of the shooting and that it was the weapon Adam was holding. The bodycam video doesn’t show Adam throwing away the weapon before he was shot.

When his hands were raised, he didn’t appear to be holding a weapon. Another video shows Adam apparently throwing something through a gap on the other side of the fence, and police video shows officers’ discovering a gun at that spot.

During a bond hearing for 21-year-old Ruben Roman, who was with Adam the night of the shooting, Cook County Assistant State’s Attorney James Murphy described the altercation in a proffer: “The officer tells [Toledo] to drop it as [Toledo] turns towards the officer. [Toledo] has a gun in his right hand.”

But now, in response to a WGN Investigates inquiry, the state’s attorney’s office says the detail about Adam having a gun in his hand the moment he was shot was inaccurate.

“An attorney who works in this office failed to fully inform himself before speaking in court,” Sarah Sinovic, a spokesperson for Cook County State’s Attorney Kim Foxx, told WGN Investigates Thursday.

Adam Toledo a 13-year-old kid from Chicago, Illinois, had his hands up without a gun

The Adam Toledo was so horrifying that Chicago boarded up municipal buildings before the video was released. That tells you all you need to know.

If you’re like me, and refuse to watch the video of 13 year old Adam Toledo being murdered by Chicago police this is all you need to know:

This system killed him.