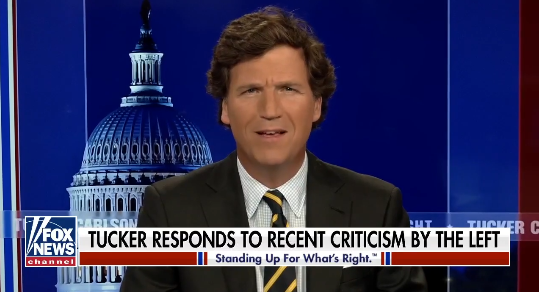 Demographic change is the key to the Democratic Party’s political ambitions. In order to win and maintain power, Democrats plan to change the population of the country.

They’re no longer trying to win you over with their program. They are obviously not trying to improve your life. They don’t even really care about your vote anymore. Their goal is to make you irrelevant.

That is provably true, and because it’s true, it drives them absolutely crazy when you say it out loud. A hurt dog barks.

They scream about how noting the obvious is immoral. You’re a racist if you dare to repeat things that they themselves proudly say.

Most people go along with this absurd standard. They dutifully shut up. They don’t think they have a choice. But no matter what they are allowed to say in public, everyone understands the truth.

Tucker Carlson’s views on white supremacist “replacement theory” (“It’s true”) have been endorsed by Lachlan Murdoch, the CEO of the Fox Corporation.

So corporations should understand that if they advertise on Fox News at any time, this is what they are supporting.

With the full backing of Fox News brass, Tucker Carlson now has zero holding him back from advancing white supremacist rhetoric to millions.

Which corporations are still willing to stand with this network? Which advertisers see nothing wrong with Replacement theory? https://t.co/KBGNR0HEn4