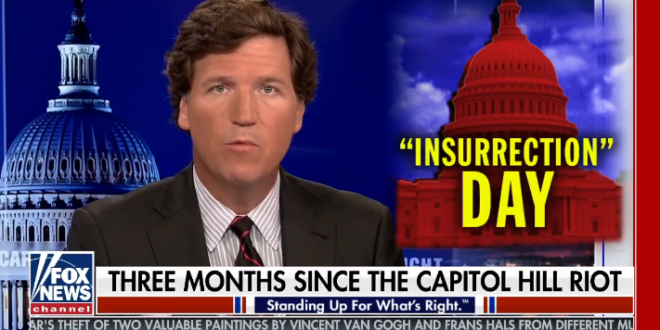 Carlson Defends DC Rioters: How Dare They “Wander” Into Their Own Building And Talk About Their Rights

They wandered freely through the Capitol, like it was their building or something. They didn’t have guns, but a lot of them had extremely dangerous ideas.

They talked about the Constitution, and something called their rights. Some of them made openly seditious claims. They insisted, for example, that the last election wasn’t entirely fair.

By the time thousands of soldiers arrived to restore order, an unarmed woman, an Air Force veteran lay dead.We know how she died.

The funny thing is, you almost never hear that woman’s name. Possibly that’s because she was not a Democratic member of congress or even a Joe Biden voter. She was a protester, her name was Ashli Babbitt. She was 35.

We still don’t know who shot Ashli Babbitt or why — no one will tell us. But then, when you’re fighting insurrectionists, you don’t have to explain yourself. You just hyperventilate about QAnon and then you do whatever you want.

When a group of sad disenfranchised people who have been left out of the modern economy show up at your office, you don’t have to listen to their complaints. Not for a second.

Why would you? You thought listening to people’s complaints was democracy? No, these people threaten democracy.

You could even shoot one of them if you want, and get away with it. Killing people without explaining yourself is an established part of counterinsurgency.