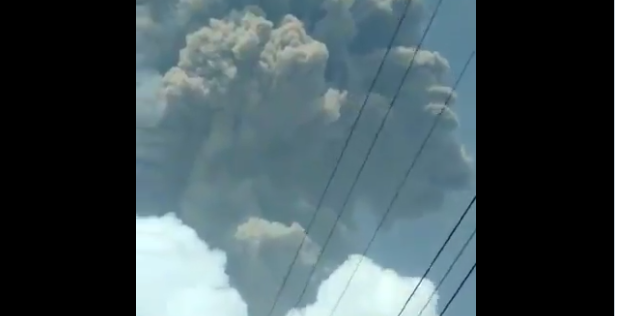 A volcano in the southern Caribbean that had been dormant for decades erupted on Friday, spewing clouds of ash and smoke miles into the sky.  The volcano, known as La Soufrière, on the northern tip of the main island of St. Vincent and the Grenadines, which began showing signs of renewed activity in late December, moved into an “explosive state” in the morning, the National Emergency Management Organization said in a Twitter posting.

Empty cruise ships were scheduled to arrive Friday at the eastern Caribbean island of St. Vincent to help transport thousands of people who evacuated their homes under the fiery glow of La Soufrière volcano which officials said could erupt at any moment.

Shelters filled up overnight as people living in the northern part of the island sought safer ground under government orders. Roughly 16,000 people live in the red zone and required evacuation.

St. Vincent gained independence from Britain in 1979 after first being colonized by the French.

VIDEO: La Soufriere volcano erupts on the island of St. Vincent which is in the Caribbean
pic.twitter.com/F7RwGQZftj

A volcano on St. Vincent has erupted, hours after increased seismic activity set off a mandatory evacuation of nearby residents.https://t.co/R0lmYzw8H8

Breaking News: A volcano on the island of St. Vincent in the southern Caribbean that had been dormant for decades erupted, spewing clouds of ash. An evacuation is underway.https://t.co/wzbL3VfkWY

At 8:41 am this morning 9-4-21 an explosive eruption began at La Soufrière volcano in St. Vincent. This is a culmination of the seismic activity that began on April 8. The eruption is ongoing and more information will be shared as things progress. #lasoufriere #uwi #volcano #svg pic.twitter.com/C2zWrjPcpP