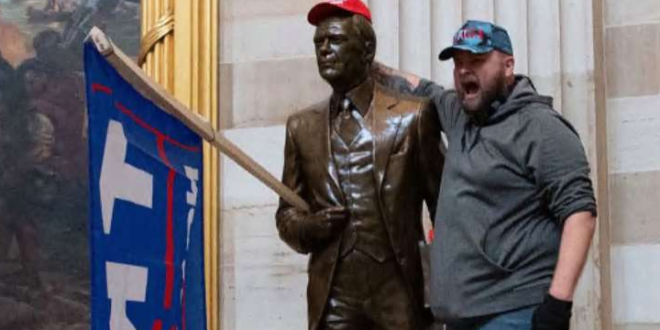 A license plate reader’s ping in Hollywood led police to a Dania Beach hotel room and an alleged insurrectionist who is facing several federal charges following the Capitol riots on Jan. 6 in Washington D.C.

The FBI arrested Richard L. Harris on March 18 at the Comfort Suites for his alleged role in the storming of the U.S. Capitol building, according to a federal detention order. He is being held without bond in the Broward County Jail awaiting transfer by the U.S. Marshals Service.

Harris, 40, is from California but he had been living out of his car on the way to South Florida, court records stated. He was identified by several people who recognized Harris from pictures taken inside the Capitol building that were posted on the FBI website.

In court documents, federal prosecutors provided images from videos and social media they say depict Harris at the insurrection. One video shows a man who appears to be Harris talking on a landline phone inside the U.S. Capitol.

He is accused of making threatening remarks into the phone about House Speaker Nancy Pelosi and then-Vice President Mike Pence, documents said.

Court documents also include a photo that appears to show Harris standing with a statue of former President Gerald Ford, complete with a MAGA hat and Trump flag.

Previous POLL: 72% Of Republicans Say Make It Harder To Vote
Next GOP Michigan Cultist Gets Warning From Dominion