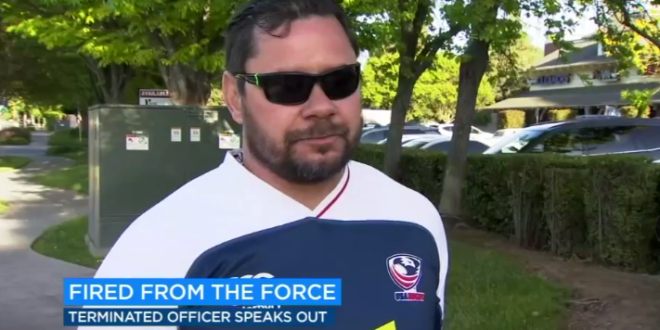 Rick Fitzgerald, then an officer with the Fresno Police Department, allegedly participated in a Proud Boys counter-demonstration on March 14 outside a theater being sold to a church that protesters said was hostile to the LGBTQ community and marriage equality.

Fitzgerald was placed on leave the following day, and his firing was made public Friday by Fresno Mayor Jerry Dyer and police Chief Paco Balderrama, following an investigation.

Fitzgerald was put on administrative leave once the accusations came to light just three weeks ago when he was seen wearing clothing associated with the group while attending the Tower Theatre protests.

He didn’t deny that he was once affiliated with the group, but says after seeing their behavior in Sacramento, he immediately walked away.

“I saw how some conducted themselves and said this is not something I want to be a part of, because there’s no honor or integrity. I left the next day and started my own group, The Sons of 76. We just do community and charity,” Fitzgerald says.