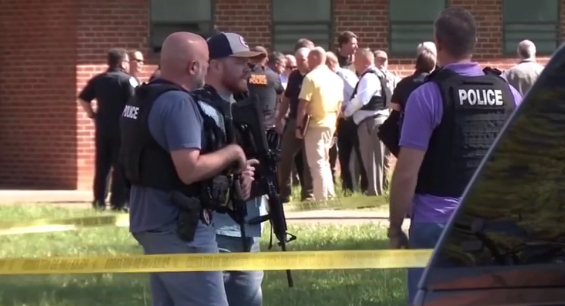 Police say multiple shooting victims, including an officer, are reported at a Knoxville, Tennessee high school. A tweet Monday afternoon by the city’s police department stated “multiple agencies are on the scene of a shooting at Austin-East Magnet.” A Knoxville Police Department officer is among the “multiple gunshot victims.”

The clips below are live.

Multiple agencies are on the scene of a shooting at Austin-East Magnet High School. Multiple gunshot victims reported, including a KPD officer. The investigation remains active at this time. Please avoid the area. pic.twitter.com/ViQirnQSpx

Knox County Schools is responding to a shooting that occurred this afternoon at Austin-East Magnet High School. We are gathering information about this tragic situation and will provide additional information as soon as possible.

For those keeping score at home — @GovBillLee signed his permitless carry bill just 4 days ago, and today we have a school shooting in Knoxville. Not great. @KnoxvilleHoller

BREAKING: KPD says multiple gunshot victims at Austin-East Magnet School in East Knoxville. The school on lockdown. we’re here on the scene with live updates as we get them. @wbir pic.twitter.com/bn0jjCd3wC

Previous Nugent: If COVID-19 Is So Bad, Common Sense Asks Why Weren’t We Shut Down For COVID-1 Through 18
Next NCAA: No Championships For Anti-Transgender States