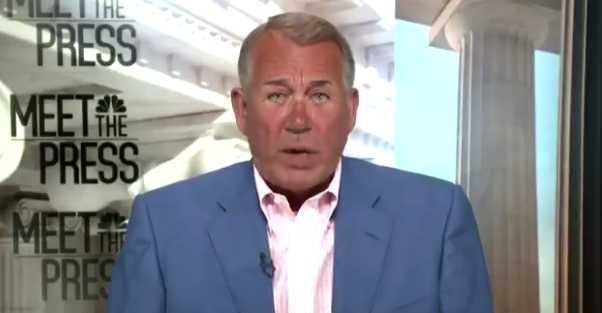 Former House Speaker John Boehner on Sunday called the plan of some House Republicans to form an America First Caucus crazy. Speaking on NBC’s “Meet the Press,” Boehner said, “I can tell you that this so-called America First Caucus is one of the nuttiest things I’ve ever seen. America is a land of immigration.”

“We’ve been the world’s giant melting pot for 250 years. And we ought to celebrate the fact that we are this giant melting pot. And to see some members of Congress go off and start this America First Caucus is — it’s the silliest thing I’ve ever seen. And Republicans need to denounce it.”

Read the full article. Late yesterday QAnon Rep. Marjorie Taylor Greene claimed no involvement in writing the platform of the so-called Anglo-Saxon Caucus. Her claim came just hours after her spokesman attacked the “backstabbing swamp creatures” who leaked caucus details, while also saying it was going to be formed.

Boehner on #MTP: “I did everything I could” to bring together GOP

The former House speaker and author of “On the House: A Washington Memoir,” tells Chuck Todd that some Republicans weren’t interested in working with him in the post-tea party era.https://t.co/LHr8jctZM4 pic.twitter.com/CgJWQrJMmq

.@SpeakerBoehner: “This so-called ‘America First’ Caucus is one of the nuttiest things I’ve ever seen.”@chucktodd: “Their definition of immigration … would say there shouldn’t be Asian-American citizenship.”

Boehner: “It has no place in the Republican Party.”