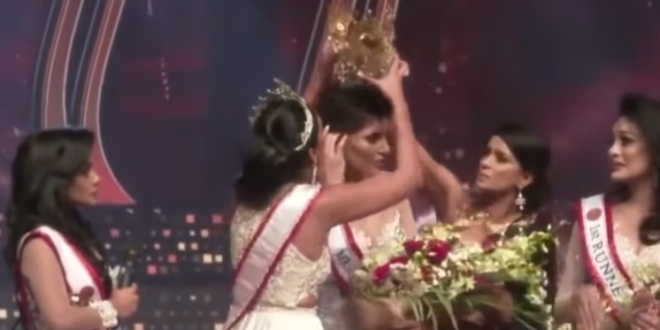 Beauty queen Pushpika De Silva won the “Mrs Sri Lanka” title at a ceremony on national TV on Sunday. Moments later, the 2019 winner seized Mrs De Silva’s crown, claiming she could not be awarded the title because she was divorced.

The prize has now been returned to Mrs De Silva, after pageant organisers confirmed she is not a divorcee. Judges named Ms De Silva the 2021 winner at the Mrs Sri Lanka final in a theatre in Colombo on Sunday night.

But the 2019 winner, Caroline Jurie, stripped Mrs De Silva of her crown, citing a pageant rule that competitors must be married and not divorced. The organisers have apologised to Mrs De Silva, who says she is separated, but not divorced.

Crowned and uncrowned winner of Mrs. Sri Lanka 2021 speaks to the police outside the Nelum Pokuna Theatre last evening after the pageant has ended. pic.twitter.com/iJhyACoCBl