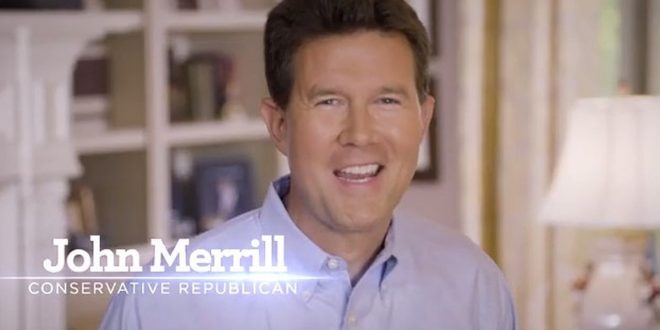 After initially denying reports of an affair, Alabama Secretary of State John Merrill on Wednesday afternoon told AL.com that he had “an inappropriate relationship” with a 44-year-old woman and will not make an anticipated run for the U.S. Senate.

In an interview with AL.com on Wednesday morning, Merrill denied having had an affair and accused Cesaire McPherson of “stalking” and “harassing” him.

McPherson declined to answer questions on the record Wednesday, instead providing a recording and a short statement. “I don’t want to say anything other than here’s the proof that John Merrill is a liar,” she said. “Here’s the true John Merrill.”

In February, Merrill was named chairman of the RNC’s new “Election Integrity Commission.” He is being term-limited out of his current post.

Merrill last appeared on JMG when he attempted to flame Twitter critics over the law requiring notarized affidavits to accompany an absentee ballot. That law requires voters to have access to a computer or photocopier, and a printer. He told one man that if he’s too stupid to figure it out, he should probably plan on “voting in person.”

Prior to that, Merrill was mentioned here during his previous failed Senate bid when he blamed mass shootings on the media.

And before that, we heard from him when he blamed “homosexual activities” for the dearth of wholesome family entertainment like Gunsmoke, which went off the air 45 years ago. When asked for an example of those homosexual activities, he cited women’s soccer.