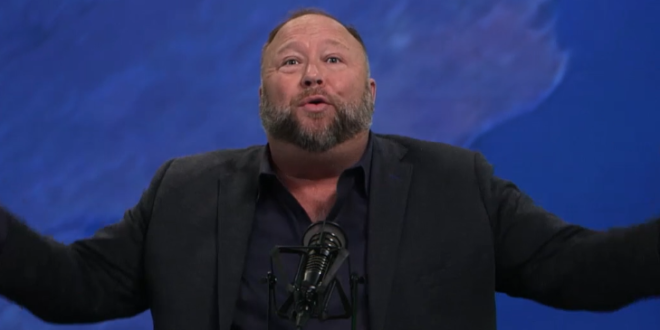 Far-right conspiracy theorist Alex Jones has debuted a new COVID-19 conspiracy theory that claims global powers planned and executed the worldwide pandemic with the ultimate goal of releasing a vaccine that gives much of the earth’s population severe brain damage. Videos promoting this conspiracy theory have racked up more than 5 million views since April 3 at Infowars’ streaming platform Banned.video.

Jones, who frequently promotes lies about vaccines, debuted the conspiracy theory on the Saturday broadcast of The Alex Jones Show on April 3, drawing on a 2017 report released by the Johns Hopkins University Bloomberg School of Public Health about a hypothetical scenario in which a fictional disease called “SPARS” causes a global pandemic between the years 2025 and 2028.

Jones also claimed of the Johns Hopkins report, which is supposed to occur in the years 2025-2028, “So far, this is a three-year drill. We are a little more than a year into the drill and it’s happening exactly as the drill says. Now within six months, or less, massive brain damage, massive death.”

Previous DOJ: No Charges For Cop Who Killed Capitol Rioter
Next Georgia Gov Censured By Local GOP Because He “Stood By And Did Nothing” To Help Trump Overturn Election