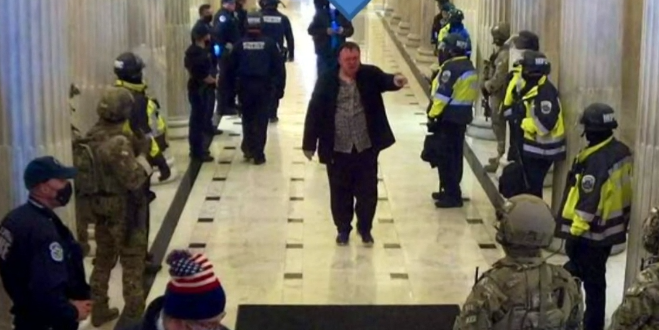 Accused Rioter: I Didn’t Beat Up Cops, They Beat Me

A Maryland man locked up for allegedly assaulting police officers on January 6 wants a judge to let him out of jail – claiming it was actually the police who assaulted him. Prosecutors say video, still images and multiple officers’ sworn statements tell a much different story. Before January 6, Daniel Egtvedt boasted on social media of his connections to Republican power players and posted photos with Rep. Dan Crenshaw (R-TX), Lara Trump and then-Vice President Mike Pence.

But prosecutors say the Daniel Egtvedt that entered the US Capitol on January 6th was a much different person than the man smiling in those photos. They accuse Egtvedt of being “incoherent” and “screaming at the top of his lungs” while repeatedly fighting with police officers and physically resisting attempts to keep him from moving further down the Hall of Columns.

“…Police had to be called to the family’s home in Oakland because he was threatening to physically stop his brother from taking their elderly mother to get a COVID-19 vaccination.” Capitol riot defendant: I didn’t beat officers – they beat me https://t.co/mLGEHAUEwY

Egtvedt boasted on social media before Jan 6 of connections to Republican power players, posting photos with Congressman Dan Crenshaw, Lara Trump and then Vice President Mike Pence. Egtveddt has been detained since his arrest February 13th after a magistrate judge denied him bond pic.twitter.com/HR16J3IJxG

Charging documents say five officers attempted to hold him back. Egtvedt’s attorney’s motion says he was “pushed down by at least nine different police officers” and “his head ricocheted off a marble column and he fell to the ground” knocking him out, causing bleeding. pic.twitter.com/iQY2ERjDfh

ARRESTED: Daniel Dean Egtvedt from Oakland, MD is charged with assault against a federal officer: “This is the people’s house and it’s been taken over. The constitution says to preserve and protect against all enemies foreign and domestic”
pic.twitter.com/02KwuIFzaD

[BREAKING] Daniel Egtvedt who has been indicted by a federal grand jury on *NINE COUNTS*. He was the guy police kicked out of the Capitol *THREE SEPARATE TIMES* pic.twitter.com/qLOiTlYuMb