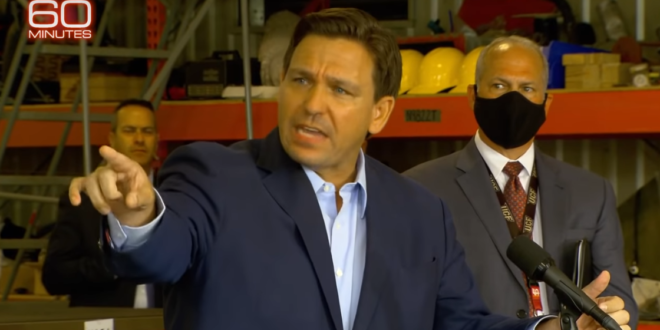 CBS News has the transcript:

Sharyn Alfonsi: Publix, as you know, donated $100,000 to your campaign. And then you rewarded them with the exclusive rights to distribute the vaccination in Palm Beach County.

Ron DeSantis: So, first of all, that– what you’re saying is wrong. That’s–

Sharyn Alfonsi: How is that not pay to play?

Ron DeSantis: –that– that’s a fake narrative. I met with the county mayor. I met with the administrator. I met with all the folks in Palm Beach County and I said, “here’s some of the options. We can do more drive-thru sites. We can give more to hospitals. We can do the Publix.” And they said, “We think that would be the easiest thing for our residents.”

But Melissa McKinlay, the county commissioner in the Glades, told us the governor never met with her about the Publix deal.

Sharyn Alfonsi: The criticism is that it’s pay-to-play, governor.

Campaign finance reports obtained by 60 Minutes show that weeks before Florida Governor Ron DeSantis announced a partnership with Publix grocery stores to distribute the vaccine in its pharmacies, Publix donated $100,000 to his PAC. https://t.co/bS3ZBeET1W pic.twitter.com/BSUlpVbXSP

In a statement to 60 Minutes, Publix says there is no connection between the supermarket chain’s campaign contributions and its partnership with the state to administer the vaccine. The company’s full statement can be read here: https://t.co/gyrW9hYPTg

“What you’re saying is wrong,” Gov DeSantis tells Sharyn Alfonsi in response to a question about whether the Publix grocery store chain gained influence through a campaign donation on his behalf. “It’s wrong. It’s a fake narrative,” he says. https://t.co/gyrW9hYPTg pic.twitter.com/5rBq7v5VOA

The 60 Minutes’ attempt at a hit piece on @GovRonDeSantis spoke more to how much they fear him rather than anything else.