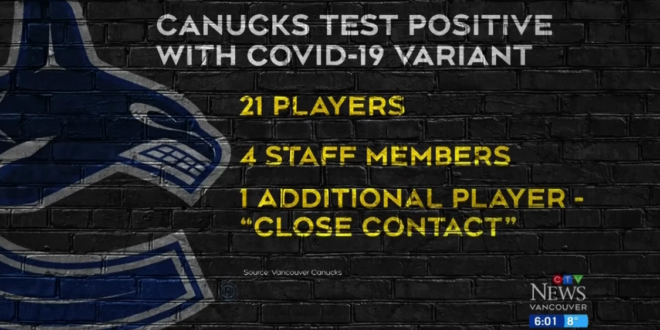 The Vancouver Canucks said 25 players and coaches have tested positive in a COVID-19 outbreak involving a variant of the virus. The team said Wednesday that 21 players, including three from the taxi squad, and four members of the coaching staff have tested positive, and one other player is considered a close contact.

“This is a stark reminder of how quickly the virus can spread and its serious impact, even among healthy, young athletes,” the team said in a statement. The Canucks say the team has confirmed that a variant is involved in the outbreak, and full genome sequencing is being conducted by the B.C. Centre for Disease Control to determine which specific variant.

“VERY ILL”—many players of the NHL Vancouver @Canucks are “very ill” with #COVID19, some confirmed to have the aggressive Brazil 🇧🇷 #P1 variant. The 14-player outbreak is “unexpected” and the team is in “tough shape”. Practices & games cancelled. BC 🇨🇦 has huge #P1 outbreak. 🧵 pic.twitter.com/3Bw6gEy23M

Previous Laura Loomer May Get “Nazi-Style” Tattoo Of Her Case Number After SCOTUS Rejected Her Social Media Suit
Next Elon Musk Reverses On Vax: “Science Is Unequivocal”