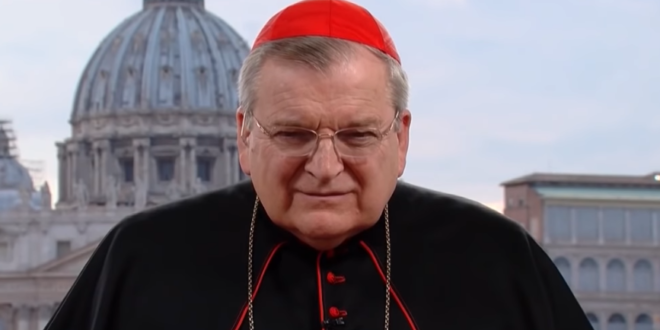 From his residence in Rome, American Cardinal Raymond Burke responded pastorally to questions posed by Thomas McKenna, Founder of Catholic Action for Faith and Family and host of the monthly broadcast “Conversations with Cardinal Burke.”

In the 25-minute interview, Cardinal Burke articulates in clear and unwavering terms a set of prudent steps of pastoral care and concern not only for the scandal given to others but also for President Biden’s own salvation.

He explained that politicians who use the sacraments for a political end and who pretend to be devout Catholics to give the impression to gain support of Catholics, are in fact not Catholic.

PREVIOUSLY ON JMG: Cardinal Burke declares that “those suffering from the homosexual condition” should have no right to “form families.” Cardinal Burke declares that Ireland is now “worse than the pagans” for voting to legalize same-sex marriage. Burke says he would deny communion to pro-gay legislators. Burke gets demoted from Vatican post after clashing with Pope Francis. Burke says families should not expose their children to their evil gay relatives.