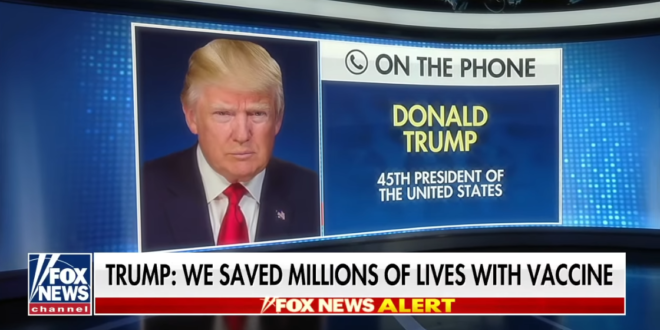 Donald Trump has told his supporters, many of whom he acknowledge are hostile to the idea of vaccines, that they should still get vaccinated against Covid. “I would recommend it,” he told Maria Bartiromo of Fox News, in one of his first interviews since leaving office.

“I would recommend it to a lot of people who don’t want to get it, and a lot of those people voted for me, frankly. But again, we have our freedoms, and we have to live by that, and I agree with that also.”

“But it’s a great vaccine, it’s a safe vaccine and it’s something that works,” he added. Mr Trump and former first lady Melania Trump were both vaccinated in January, but didn’t reveal that fact to the public until March, after the former president had left office.

Read the full article. In the interview below, Trump again claims that drug companies took out “tens of millions of dollars” in ads against him because he’d lowered drug prices so much. That, of course, never happened. There were no such ads.

Trump is asked by Fox News’ @MariaBartiromo if he would recommend everyone get the vaccine: