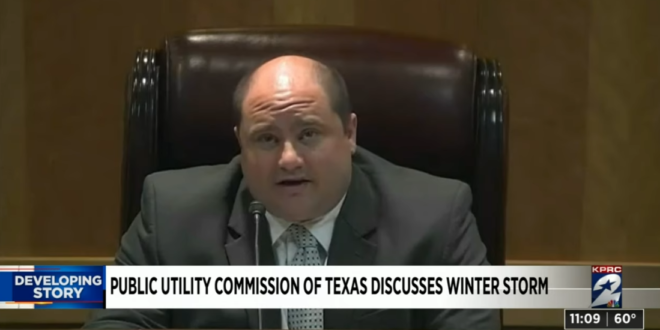 The third and last remaining commissioner of the Texas utilities regulator resigned under pressure on Tuesday after the release of comments to investors vowing to protect utility profits and dismissing financial hits from a cold snap on municipal power companies. The resignation came soon after the disclosure of inflammatory comments by the Public Utility Commission Chair Arthur D’Andrea in a March 9 call with Bank of America utilities’ analysts.

On the March 9 call, D’Andrea told investors and analysts he had “tipped the scale as hard as I could” to prevent repricing and would keep “the weight of the commission” against it. Referring to San Antonio’s city-run CPS Energy that has contested $200 million in power charges, D’Andrea dismissed the impact in remarks to Bank of America analysts: “They’ve got a lot of money. They’re fine.”