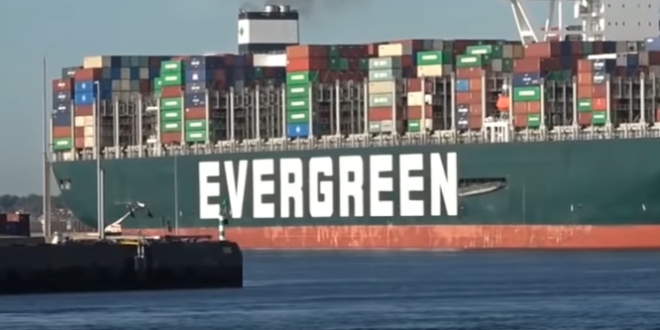 A container ship blocking the Suez Canal like a “beached whale” sent new shockwaves through global trade on Thursday as officials stopped all ships entering the channel and the salvage company said it may take weeks to free.

The 400 m (430 yard) Ever Given, almost as long as the Empire State Building is high, is blocking transit in both directions through one of the world’s busiest shipping channels for oil and grain and other trade linking Asia and Europe.

Several dozen vessels, including other large container ships, tankers carrying oil and gas, and bulk vessels hauling grain have backed up at either end of the canal to create one of the worst shipping jams seen for years.

The Suez Canal temporarily suspended traffic on Thursday as efforts to dislodge a 400 m (430 yard) long container vessel that has blocked the waterway continued for a third day, with eight tugs working to straighten the ship. https://t.co/PSwQXRyeKQ

The Ever Given remains lodged in the Suez Canal and tug boats are still working to free the massive container ship, but traffic is piling up. Oil prices jumped about 6% on Wednesday due to fears over delayed crude shipments. The incident was caused by a dust storm early Tuesday. pic.twitter.com/yVV8XwuEwA