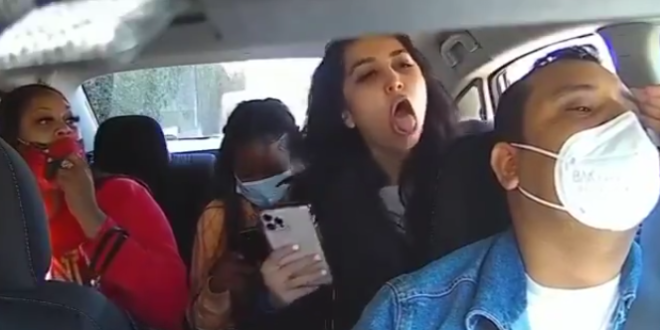 SF Police May Bring Charges In Assault On Uber Driver

A video that shows a ride-sharing passenger ripping off her mask, coughing on a driver, attempting to steal his phone and breaking the driver’s mask has prompted a police investigation and bans from both Uber and Lyft.

San Francisco police say the incident occurred Sunday and a 32-year-old driver for Uber was the victim. The conflict began as one of three passengers refused to wear a mask, prompting the driver to end the ride, police say.

“An altercation occurred and a second passenger reached over the driver’s seat (from the rear seat area) and stole the driver’s cellphone from his hands,” police said.

Read the full article. My first post on the incident is here. The ringleader, who fancies herself an Instagram fashion influencer, has now made her page private. Her follower count has nearly tripled to almost 38,000. The video below has been viewed over 7.5 million times.

(1/4) The victim, a 32-year-old male, TNC driver picked up three passengers at San Bruno Avenue and Felton Street on March 7, 2021 at approximately 12:45PM. One of the passengers was not wearing a mask. pic.twitter.com/2J9NsM8MG2

(2/4) Due to this fact, the driver stopped and ended the ride a few minutes later at San Bruno and Silver Avenues. An altercation occurred and a second passenger reached over the driver’s seat (from the rear seat area) and stole the driver’s cellphone from his hands.

(3/4) The victim grabbed and eventually regained possession of his phone.
⁰The suspects exited the car and the third passenger reached into an open window and sprayed what is believed to be pepper spray into the vehicle and towards the driver. The suspects fled the scene.

(4/4) The SFPD Robbery Unit is investigating the incident.

We will work to release pertinent updates as they become available.

Previous Lee: Voting Rights Bill Is As If From “The Devil Himself”
Next Marcia Fudge Confirmed As HUD Sec In 66-34 Vote