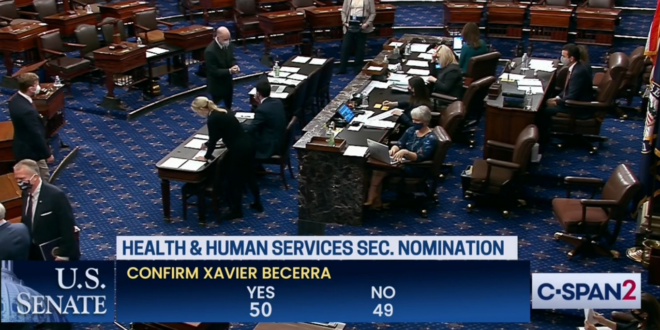 The Senate narrowly confirmed Xavier Becerra to be the Health and Human Services secretary on Thursday, giving the former California attorney general a crucial role in fighting the pandemic. Becerra, the son of Mexican immigrants, is the first Latino HHS secretary. The vote was 50 to 49. During the confirmation process, Becerra stressed his upbringing, his father’s recent passing and his efforts for expanding health care access as California’s attorney general and a 24-year Congressman representing a Los Angeles-based district.

Xavier Becerra was confirmed as health secretary in a 50-49 Senate vote. He will take over an agency at the center of the federal Covid-19 response. https://t.co/IxytKJoT9B

Previous Rep. Chip Roy Calls For Lynchings: “Find All The Rope In Texas And Get A Tall Oak Tree, We Ought To Do That”
Next Biden To Meet With Asian-American Leaders In Atlanta