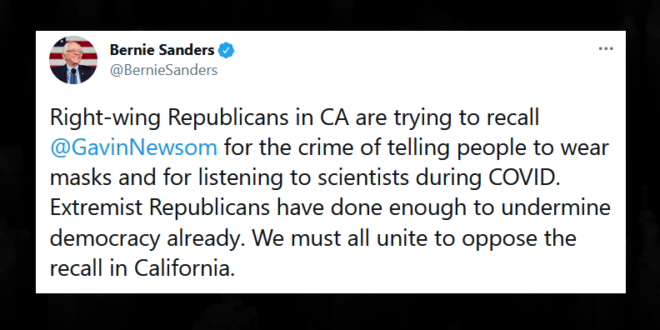 Sen. Bernie Sanders (I-Vt.) on Monday urged his supporters to rally behind California’s embattled governor, Gavin Newsom (D), who faces a recall campaign. Sanders in a tweet noted Republican opposition to Newsom is centered around the governor’s “crime” of trying to stop the spread of COVID-19 in the state.

The tweet followed news that the GOP-led recall effort’s organizers believe they have enough signatures to trigger an election. Under California law, just under 1.5 million signatures from state residents are required to start the process.

Right-wing Republicans in CA are trying to recall @GavinNewsom for the crime of telling people to wear masks and for listening to scientists during COVID. Extremist Republicans have done enough to undermine democracy already. We must all unite to oppose the recall in California.

Previous DeSantis: Chatter About 2024 WH Run Is “Premature”
Next Cultist Pastor: God Created Us To Be Workers So We’ll Have Jobs In Heaven, But Without Any Govt Regulations