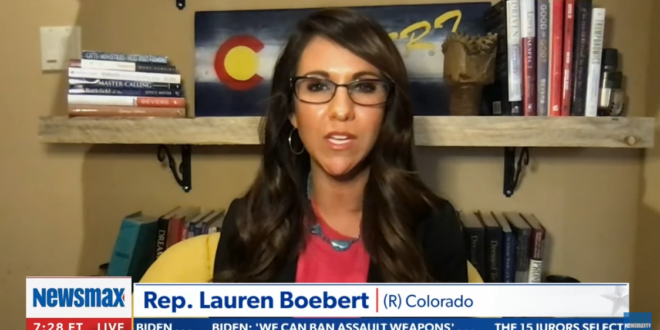 Sharp-eyed critics of Rep. Lauren Boebert (R-CO) noticed a none-too-subtle change in her decor on Tuesday night after she posted an interview she did with Newsmax on the mass shooting in her state on Monday. In a previous question and answer Zoom session she did weeks ago, she had a full display of her personal armory haphazardly stacked on the bookshelves behind her. Tuesday night those same guns were nowhere to be seen, replaced with books.

There are no gun laws that would’ve stopped Ahmad Al-Issa from killing ten Americans in cold blood.

Big government gun grabs are not the answer to the issue of violence in our nation. pic.twitter.com/bgw7dOUiD5

You moved your slaughter weapon decorations. Also, you’re wrong. A law prohibiting him from buying an AR-15 would have stopped him from obtaining one last week. Love that you use his name, though, you didn’t use Atlanta shooter’s name. Wonder why?

He look, you redecorated your shelf! pic.twitter.com/GsyFHWaILU

What happened to the assault weapon shrine, Shooty McCriminal?

Thoughts and prayers to the poor assistant had to run out and buy a bunch of random books for your shelf. pic.twitter.com/19IxwYUjQi

Why did you change your background? pic.twitter.com/UHAcWae58x