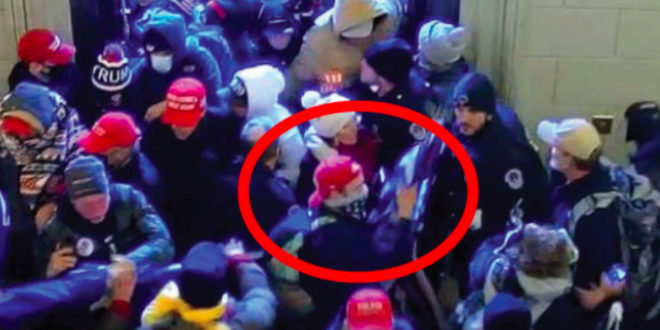 A U.S. Capitol rioter who brought a rope with him to Congress began searching for a Black officer that he believed fatally shot Ashli Babbitt and threatened to lynch him, federal prosecutors wrote in a legal brief on Monday. The startling allegation surfaced in court papers against 34-year-old Garret Miller, whom prosecutors want to keep behind bars pending trial in the Jan. 6th siege.

“He became consumed with her death and circulated photographs on Facebook of an African-American police officer that he believed was responsible for her death,” Assistant U.S. Attorney Elizabeth C. Kelley wrote in a 16-page legal brief on Monday. “Miller threatened to kill that officer, stating that he wanted to ‘hug his neck with a nice rope’ and that ‘he will swing.’ He also said that the officer deserved to die and that ‘it’s huntin season.’”

Garrett Miller stormed the Capitol with a grappling hook, rope and a level 3 vest, and posted “assassinate AOC” on social media, said he just “wanted to incriminate” himself.

The FBI founds photos and videos from inside the U.S. Capitol Rotunda posted on Garret Miller’s Facebook, Twitter and Instagram accounts. In his posts he also directed violence and threats toward the officer who fatally shot a woman inside the Capitol.
https://t.co/TcB5Yc57CS

ARRESTED: Garret A. Miller, 34, from Richardson Texas made death threats in his posts, calling for the murder of a U.S. Capitol Police officer and the assassination of @AOC. https://t.co/56nyb0XZDZ https://t.co/vg0fIAiHjZ pic.twitter.com/ntie4gFvLD

Previous Bachmann: The 2020 Election Was A “Coup” [VIDEO]
Next VW Accidentally Posts New Name In US: “Voltswagen”