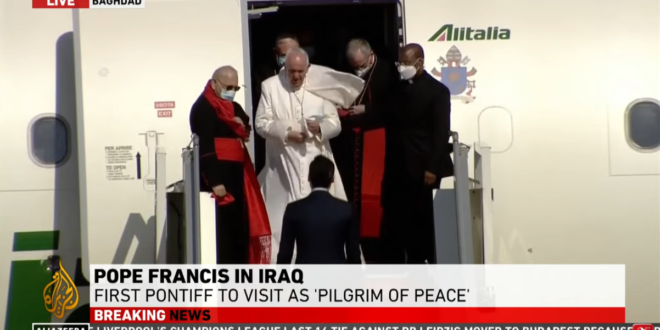 Pope Francis has touched down in Iraq for the first-ever papal visit to the predominantly Muslim country, beginning a four-day visit in Baghdad, where yellow and white Vatican flags and likenesses of the pontiff flutter above hastily weeded traffic circles.

Prime Minister Mustafa al-Kadhimi welcomed Francis at Baghdad International Airport. He was greeted with fanfare as he stepped onto the red carpet, and then by a choir as he entered the airport.

Crowds of people waved Iraqi and Vatican flags as he passed on his way to sit and speak with the prime minister in a reception area of the airport. The conversation was not broadcast. As Francis left the airport, he passed people dancing and singing, few of whom were wearing masks.

Once a rich tapestry of faiths, Iraq has been hallowed out as orthodoxies hardened. Its Jews are almost completely gone, and its Christian community grows smaller every year. About one million have fled since the 2003 United States-led invasion. An estimated 500,000 remain.

That backdrop makes the pope’s visit on Saturday to the ancient city of Ur — traditionally held to be the birthplace of Abraham, who is revered by Muslims, Jews and Christians alike — all the more powerful.

To that end, his trip carries a motto from the Gospel of Matthew: “You are all brothers.” But the pope’s agenda also casts a spotlight on the terrible toll wrought when divisions harden and violence takes over.

Iraq is deploying thousands of additional security personnel to protect the 84-year-old pope during the visit, which comes after a spate of rocket and suicide bomb attacks raised fears for his safety.

“I am happy to be making trips again,” he said in brief comments to reporters aboard his plane, alluding to the coronavirus pandemic which has prevented him from traveling. The Iraq trip is his first outside Italy since November 2019.

“This is an emblematic trip and it is a duty towards a land that has been martyred for so many years,” Francis said, before donning a mask and greeting each reporter individually, without shaking hands.